“Police State USA: How Orwell’s Nightmare Is Becoming Our Reality” chronicles how America has arrived at the point of being a de facto police state, and what led to an out-of-control government that increasingly ignores the Constitution. Order today! 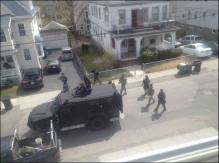 Some of the social media commentary so far: “The Pentagon’s ‘Operations Jade Helm 15′: The Floodgate towards Martial Law and World War III?”

And another: “Using Foreign Troops with Jade Helm Martial Law is TREASON.”

Yet one more poster pointed to recent reported Wal-Mart closures in Texas, California, Florida and Oklahoma with concern, saying the cited “plumbing problems” cited as the reason for the sudden shut-downs just don’t meet the smell test.
“Employees impacted by the Wal-Mart closures were given just a few hours notice about the six-month shutdown,” the blog Inquisitr wrote. “Approximately 2,200 employees will now be without a paycheck during the ‘extended repairs.’ … The abrupt Wal-Mart closures announcement has reportedly left employees confused and Americans pondering the existence of Wal-Mart underground tunnels and Operation Jade Helm conspiracy theories.”

One of the theories?

Inquisitr reports: “One of the widely circulating rumors associated with the Jade Helm Wal-Mart story on the Internet speculates that the military will use the underground tunnels to move undetected around certain states with the stores being used as either a communications hub or FEMA camps.”

The fear is ratcheted by the fact city officials who govern the areas of the impacted Wal-Marts say the stores haven’t filed any permit requests for plumbing problems, Inquisitr said.
So the question I want to pose to is Why are Texas & Utah declared hostile states and then share why I think the reason is? Likely because this elite covert training mission is to be carried out among “regular american civilians” without there knowing and as soon as an armed American shoots one of these “pawn soldiers” out of legitimate fear for his/her life & family, there will be “REAL AMERICAN VICTIMS” because the order for troops to shoot at will anyone who poses an immediate threat would soon follow. Also don’t buy into this STUPID WALMART SIDE STORY aimed to discredit whistle blowers and appear to the public like  it’s just “ANOTHER CONSPIRACY THEORY FROM THE CRAZY’s” so we ignore another one of these yet again…….In my opinion!!!